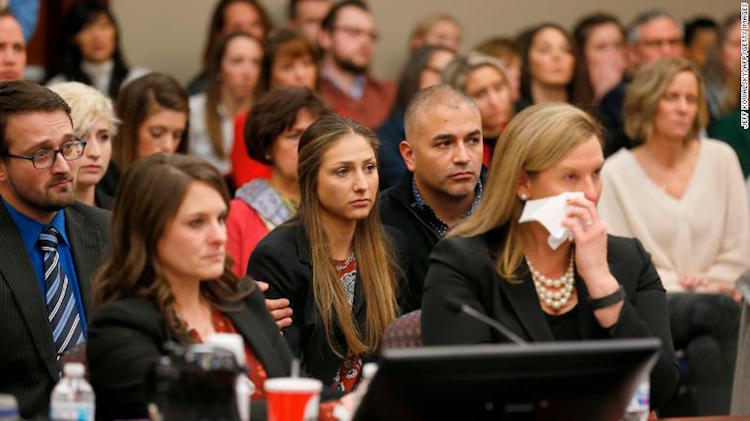 The ex-USA Gymnastics and Michigan State University doctor was sentenced to 40 to 175 years in prison, a judge announced yesterday. This comes after more than 150 women and girls said in court that he sexually abused them over the past two decades. The disgraced world-renowned sports physician treating America’s foremost Olympic women gymnasts pleaded guilty to seven counts of criminal sexual conduct in Ingham County in Michigan and admitted to using his trusted medical position to assault and molest girls under the guise of medical treatment. Judge Rosemarie Aquilina let all the victims share their stories, listening and offering personal comments to each. And to Nassar, “I’ve just signed your death warrant.”

Remeber when we found out that Apple was slowing down our phones on purpose and making us feel like we need to keep buying the latest model? Well, they’ve decided to let us control our own iPhone’s fate by allowing you to turn off a controversial “throttling” feature which slows down phones as they age. The new update will “show battery health and recommend if a battery needs to be serviced,” according to Apple. You’ll be able to turn off the “power management feature” which “dynamically manages maximum performance to prevent unexpected shutdowns.” Now you don’t have to worry about a surprise shutdown when your phone is still at 23%.

Additionally, Apple announced the release date of its “HomePod,” a microphone-equipped smart speaker rivaling those of Amazon and Google. The speaker is operated using voice commands and features six microphones so sensitive they can pick up your words even when loud music is playing. It can be used to control devices around the smart home and is connected to Apple Music so it can play more than 45 million songs. They’ll be available for purchase on February 9th.

Much to our disappointment, Oprah will not be running for the next US Presidency. She told InStyle, “I’ve always felt very secure and confident with myself in knowing what I could do and what I could not. And so it’s not something that interests me. I don’t have the DNA for it.” Many people had suggested she run for office after her moving speech at the Golden Globes earlier this month addressing the #MeToo movement against sexual harassment. Since then, the hashtags #Oprah2020 and #OprahForPresident began trending on social media and a number of celebrities gave her their support. But “it’s not something that interests me,” according to Oprah herself. She gave the InStyle interview weeks before her empowering Golden Globes speech.

Burger King has released a commercial about net neutrality to help people understand what it means. Following last year’s hugely successful bullying campaign comparing bullying a kid to bullying a Whopper Jr. the fast-food chain has done it again with net neutrality. In an attempt to explain the unfair and undemocratic concept to the masses, Burger King shot a commercial at a restaurant where they introduced Whopper Neutrality, a system in which customers pay more to get their Whoppers faster. To get their Whopper faster, the customer had to pay $26. When customers were told that Whoppers were ready and made but they just weren’t able to get them unless they paid more, customers protested: “This is the worst thing I’ve ever heard of.” Watch the commercial here.

50 Cent just cashed in more than $7.5 million in Bitcoin after remembering he had taken Bitcoin as a method of payment for his 2014 album, Animal Ambition. At the time, Bitcoin was already worth hundreds of dollars but the value of those sales has since skyrocketed and the rapper’s bitcoin holding is now reportedly worth more than $7.5 million. It’s kind of like when you find a $20 bill in your jeans, but you know, times a million. In an Instagram post (that has since been deleted) he said “Not Bad for a kid from South Side, I’m so proud of me,” and to make everyone else feel worse about not being rich he added, “I’m a keep it real. I forgot I did that shit.” This comes after the rapper filed for bankruptcy protection under his given name, Curtis Jackson a few years ago. Turns out he’s going to keep getting rich, and probably won’t die trying.